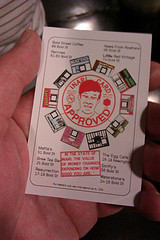 Picking up from my opening account of the recent AND Festival in Liverpool, I'd like to focus today on the three AND salons held over the weekend at LEAF. Each discussion concerned a different topic and I'll come to them in turn.

The first salon was rather early on Saturday morning and I wondered if attendance would be affected by the 10am kick off. I'm sure many festival attendees were nursing hangovers at that time but the turnout was actually impressive. The subject for this discussion was censorship, always a thorny issue. Although the Internet has given us the power to publish and broadcast ourselves globally, censorship increasingly rears it's ugly head in today's society. The panel were well equipped to reflect on that. First Egyptian curator Shady Elnoshokaty presented a powerful film about the effects of the recent uprising and subsequent change of government in Egypt. Living in our cosy Western democracies it's easy to forget the real struggles for freedom going on around the world as we speak. Not in some history book. The moving film brought home much of this. The ongoing situations in Libya, Syria and many others should also serve as a powerful reminder. Next Steve Kurtz, professor at the University At Buffalo and founder of the Critical Art Ensemble talked about his experiences of censorship. Something he is more than qualified to do as he was indicted by a grand jury in 2004 on supposed "bioterrorism" charges. These charges concerned his work with Dr Robert Farell of the University Of Pittsburgh in purchasing and transferring completely non-harmful bacteria for museum installations. Kurtz showed pictures from the FBI raid on his house and related his story to the crowd. Something which you can discover more of in the 2007 film Strange Culture should you wish. There followed a lively discussion with the audience on the merits (if any) and effects of censorship on modern society. It was interesting to hear from two people who have directly experienced censorship at the hands of a state government, all be it in very different circumstances. 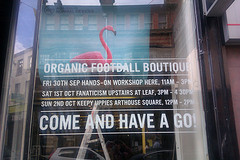 There was a gap between salons where some attendees went off to the watch the Merseyside derby match. This might seem odd at an art festival but actually made perfect sense when we came to the next salon. The subject of the afternoon session was fanatacism and the panel consisted of James McKenna from the Spirit Of Shankly organisation and artist John O'Shea, who is currently exploring the roots of football through his Pigs Bladder Football project. He began with a video explaining some background to his work. It showed the ancient called Uppies & Downies being played in it's home town or Workington, West Cumbria. I had heard something about this game before but didn't know the details. It's seen as a forerunner to what we know as football in many ways and dates back to Medieval times. There are no strict rules and John related his experience of taking part. I was surprised to hear there are few injuries and little violence considering the complete lack of rules. This all links into John's work on the origins of football. I interviewed him about that later, which you'll be able to hear soon. After John's introduction James told us how he became involved with the Spirit Of Shankly group

The following day at 1pm the third salon took place, this time concerned with reality management. I wasn't entirely sure what this term referenced going into the session, but I was pleased to discover my fears of it being  management-speak were misplaced. The panel consisted of authors Mark Pilkington and Mark Fisher with chair Roland Denning, the man behind The Belief System. We began with a presentation from Mark Pilkington who told us about his book Mirage Men. His book explores the use of misinformation, superstition and paranoia by governments throughout history. I was particularly interested in his research into the Second World War and the use of illusionists and famous stage magicians on both sides. Including the faked teleportation of a whole town 20 miles down the coast by simply recreating the lighting pattern at night. All designed to strike fear into the enemy that supernatural forces were against them. Next Mark Fisher talked about his and it's origins. Spirit Of Shankly is a supporters Union for fans of Liverpool FC, of which I am one. It was formed in early 2008 in reaction to the conduct of the American club owners at the time. The group aims to represent the interests of supporters and make them heard at board room level in the long term. They claim to be the first football supporters union in the country. After the presentations chair Andy Miah asked questions and kicked off the deeper discussion on football and fanaticism in the modern age. Is it out of touch with the common man? Speaking as a football fan I feel it is. The audience largely seemed to agree with that position and interaction was good. I particularly enjoyed James' points about the wages players are paid today and wider financial implications of that. Many people complain but still regularly pay to go and watch matches. He reflected well on this, as did the rest of the panel.

book Capitalist Realism in which he explores how globalised capitalism has managed to influence our perceptions and defeat all attempts to usurp it in recent history. All of this fit nicely into the festival theme and I enjoyed the discussion which followed on PR and marketing spin. Some people in the audience seemed to hold the view that PR is always evil, a misdirection. I don't agree with that, it seems a short sighted statement. Is promotion and marketing done by charity groups evil? It does show that the discussion got people thinking though and it continued long into the afternoon at the downstairs bar.

Overall I found the 3 salons to be very interesting and thought provoking, surely the intention. The location was good and the panellists well recruited. If you'd like to hear more about the Pig's Bladder Football project please check out my short audio interview with artist John O'Shea.

Review commissioned by All Points North. AND festival is a partner of All Points North, an initiative set up to profile major contemporary art spaces, events and festivals happening across the North of England this Autumn. Visit the website at http://allpointsnorth.info