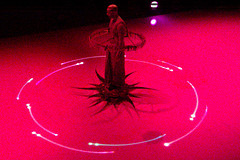 The Abandon Normal Devices festival took place in Liverpool recently, from September 29th to October 2nd. I was lucky enough to be there and while I'd attended some smaller AND events before, I had little idea of what to expect. Nevertheless I dove into various exhibits, discussions and performances over the weekend.

The festival began for me personally with a press call at the FACT building on Thursday morning. We went over the schedule before being escorted to nearby St Peter's Square for the world première of an exhibition called The Immortal. As we walked down the road one of the FACT staff described it to me as "strange, but hauntingly beautiful". Inside the building Revital Cohen had assembled a collection of life support machines, spluttering and pushing clear fluid (presumably water) around a series of tubes. A friend commented to me that perhaps red liquid would be more representative of blood, but I didn't feel this was necessary, and may even have been a step to far. The various machines and pumps throbbed like a living organism, a beating mechanical heart. The theme behind the festival was belief and belief systems. The central question I took from this piece was “what does natural life really mean?”. Could this machine be described as alive? It's very purpose and application is to keep human beings alive artificially, so does the machine itself qualify as life? At first I wasn't sure but I was soon won over and I think the artist has done a good job of questioning our notions of natural life. Without straying too far off into Sci-Fi narrative, it is becoming more and more possible to see a future where our lives depend on machines. Some would say they already do. Perhaps we will merge with machines to become something else, another stage of evolution. Many respected scientists already firmly believe this. Though we only spent a few minutes in there, I now understood the strange and haunting beauty of this exhibit. 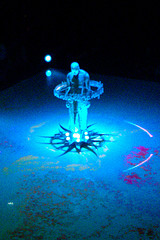 Later that day I attended the official festival opening event at The Black-E, a venue I'm very familiar with. We saw some speeches by the various festival luminaries before making or way into the main performance space for The Modes Of Al-Ikseer. In keeping with the theme of belief this piece centred on an ancient Hindu myth. The story of how the gods and devils put aside their differences and allied to create the elixir of life. The performance consisted of artist Harminder Singh Judge standing motionless in the centre of a lake of milk (real milk) on a slowly rotating platform. It looked as though he was meditating for the duration. The whole room was dark and filled with quite abrasive noise and sound effects. I saw some people holding their ears, but many years of playing in loud rock bands prepared me well for this aural assault. There were laser projections onto the milk and various lighting effects, all of which looked nice but didn't hold much mystery for me as a former theatre technician. The performance lasted 45 minutes and to be honest I found it a little sparse. It was interesting but there wasn't quiet enough going on to sustain interest for such that period. Around the performers waist were written the words "pick up the receiver, I'll make you a believer" which I instantly recognised as lyrics from the Depeche Mode's “Your Own Personal Jesus”. A rather literal reference to the festival theme I thought. Perhaps it was tongue in cheek. The song actually played at the climax and this signalled the intention of the piece. To question the notion of belief, in this case religious. I thought the concept was good but I wasn't quite convinced by the execution if I'm honest.

Following this I headed to FACT again and saw The People's Secretary by Zhang Qing. This installation aims to challenge the overarching influence of the state in China. It uses CCTV footage and Communist Party propaganda techniques to tell the story of Liang Zhifu and his care for the people of his community. I found the use of CCTV footage very effective as it always gives you the sense of fly on the wall observation which choreographed or more invasive filming cannot deliver. If you put a camera in front of people they will perform differently towards it, this felt a lot more natural. This exhibition is on until the end of November so you still have time to head along and see it. Next I made may to Static on Roscoe Lane for another set of performances presented by art agency Mercy. There was some delay in setting up and I spent most of that time talking to other attendees in the bar. It seemed to be mainly technical hitches but eventually the performance began down in the main space. At this point I have to apologise for not being able to recall the exact order of artists or musicians I saw. I didn't see the whole performance, only a couple of "acts", if I can call them that. It largely involved what I would describe as art noise, the artists may not call it such but as a musician I didn't find it to my taste. I'm loath to criticise and perhaps I just wasn't in the right frame of mind.

This concluded the opening night of the festival and in the following article I will discuss the three AND salons I attended at LEAF. I also recorded an interview with artist John O'Shea about the Pigs Bladder Football project. All of this still to come, so join me again next time...

Review commissioned by All Points North. AND festival is a partner of All Points North, an initiative set up to profile major contemporary art spaces, events and festivals happening across the North of England this Autumn. Visit the website at http://allpointsnorth.info

Read 1751 times
Tweet
Published in Entertainment and Culture
Tagged under

More in this category: « Adam Buxton presents Bug - the Evolution of Music Video at FACT AND Festival 2011 - Part 2 »