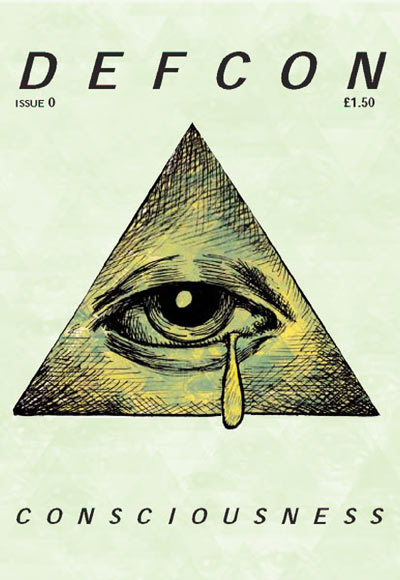 Satirical magazine Defcon is looking to launch itself into the internet age and is seeking local writers to get involved.

After a long, long hiatus Defcon magazine is planning an online magazine and a fanzine. The original magazine's focus on what could be described as something between satire and therapy will still be in there, but it will also have a broader cultural focus. It will be North-West centric but highly international. If you imagine that it is as focussed on the North West as a gritty ITV detective series might be, but understands that there are policemen everywhere, then you will be close enough to the truth. The North West focus will predominately be within features, previews and interviews. Other sections will be a free for all.

The tone will be informed but emotionally erratic. We will be looking for contributors to cover whatever cultural topic they desire in an original and inventive way, but there will be themes and if not a house style, then maybe a house attitude. The column we will be looking for most contributors for would be an 'if you like this, you will love this' idea that crosses cultures, genres, common sense. So if you see a link between Marvin Gaye's outrageously vengeful, bitter masterpiece Here, My Dear and the episode of The Simpsons where Homer adopts a child to get back at Bart, then go for it. That one's actually easy... but maybe a connection between A Fistful Of Dollars and Zidane's head-butt in the World Cup Final requires more invention. It doesn't have to be funny as long as some part of you believes it. Desperately earnest would probably be even more fun.

We will also be looking for interesting interviews and features but these will be limited and always discussed with the editorial team. Cool ideas for visuals can also be discussed. There will be some focus on comedy that people will probably be approached to write as that side of things will be a bit sniffy and limited in its approach (like all good comedy).

A fanzine/mag will be produced to help launch the site which will be almost entirely comedy but will shove snippets from the site in. The site would need a lot of initial input and if you are interested we can suggest topics to link into or feel free to suggest something you feel would be interesting enough to kick start a thread. Anything that has a social/political/philosophical context beyond face value would be good.

There is an initial meeting at 6pm at Sound Food and Drink, Duke Street, this Friday (28th Feb). Please come along and hopefully things will be a bit more clearly explained.

You can find some rough PDF copies here

More in this category: « Listen Up - Inspiring audio collaboration Powerplant to visit The Capstone EU funding opportunities for arts & culture – all you need to know! »
back to top