I Have a Good Feeling About This Star Wars Fans 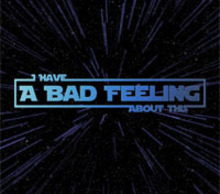 No sorry "I Have a Bad Feeling About This" - That's what this propective movie is called. I say prospective cause as it hasn't been made yet and I

“I Have a Bad Feeling About This” is a quirky, upbeat, buddy-comedy/Sci-Fi adventure. The story follows the exploits of Andy and Sam, two Star Wars-obsessed slackers in their early twenties, living in the suburbs of Liverpool. Sam is soon to be leaving Andy to go to university, but before they part ways for good, Andy and Sam must embark on a journey to the furthest reaches of town, to try and find a pair of tickets to a one-off showing of the original Star Wars trilogy. Along the way they meet dodgy ticket touts, angry yoga instructors, deranged thieves, clueless police, the suburban mafia and a dangerous Lightsaber-wielding madman. say YET because I certainly hope it is made as it looks fantastic. The Films premise is.... “Not that long ago. In a suburb not that far away…”

I Have a Bad Feeling About This - Full IndieGoGo trailer from Alan Donohoe on Vimeo.

Now then Star Wars Fans, tell me you can watch this video and not donate some money. I was lucky enough to meet Alan Donohoe the co-writer last week when he gave a quick talk at Ignite Liveprool, I'd invited him along to show his promo, talk about the film and encourage people to give generously via Indigogo the crowd funding site.

I really hope that it is made as it looks great and we really need to celebrate some local film makers here in Liverpool. So watch the promo and if you can't give any money then promote it to a friend.

More in this category: « Cultureshock at FACT Don't Mention the 47 »
back to top