In an effort to bring Art in Liverpool FM more arts and music audio from across Liverpool (and the Wirral) we have mananaged to convince Dan Lynch from Rathole Radio to let us mirror his fortnightly podcast Rathole Radio.

Broadcasting every fortnight Radio Visual offers an insight into the New York Art scene. With high production values derived from the producers who are Claire Hamilton, the BBC Radio Merseyside arts reporter and John Connor the ex curator at FACT, Liverpool. 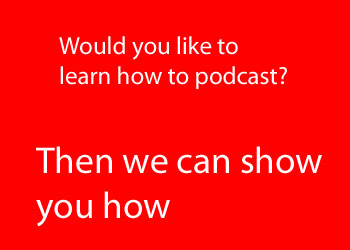 Podcasting is simple and we can show you how.

If it wasn’t simple I couldn’t do it, plus it’s a great way for communicating with your audience!


Let people know what you are up to, or what project is coming up next, maybe throw in a bit of performance and you have a great magazine programme. Let them listen to the excitement in your voice rather than the italics on the page.

ArtCast is folly's platform for public access to new and innovative art, exploring the creative potential of the podcasting medium.

For April 2009, in association with moves, the international festival of movement on screen, we have selected five of the best new video works made by students based in England's Northwest, in response to the theme of moves09 - “Beyond Movement... What's Your Story?”

There will be five videos available to download or watch online. Starting on 24th April 2009, a new video will be released daily, throughout moves09 (23rd to 28th April).

Visit http://www.folly.co.uk/artcast now to find out more, subscribe to the podcast feed and check out the first video release. All the videos will also be available to play or download direct from the folly site as the festival progresses.

folly is a non-profit digital arts organisation and registered charity, working in the Northwest of England and online.

moves celebrates its 5th anniversary, 23 to 28 April in Manchester, Liverpool, Chester and UK-wide in cinemas, bars, restaurants and on the giant outdoors BBC Big Screens. At moves09 you can WATCH, SHARE, CREATE, and PLAY! The full festival programme with downloadable schedule, festival map and festival pass forms are available online at http://www.movementonscreen.org.uk
Published in Podcast news
Be the first to comment!
Read more...
Wednesday, 01 April 2009 10:37

Here Bernie is free from the constraints of Radio Station play lists and can once again express his love of music.

Good on you Bernie, we want more.

Preston FM on air with podcasts to!

Preston FM has been doing a great job in the North West's third city.  Built out of the 20 years of experience in arts and community projects from PRESCAP, Preston FM has had a great  first 6 months.

If you start off serving the needs of the community in which you live and work as PRESCAP have done then it naturally follows that you will try and give the people a voice of their own and this is just what Preston FM has done. All of the ideas and talent comes from the local area with all sorts of community groups getting involved.

They offer full training in radio productions skills - even more reason to get involved.  Or you could always give up some of your time each week as they are also seeking volunteers to help out. And maybe if you are looking for something more serious at the moment they are advertising for an assistant station manager

If you live in the area then retune that dial and pick up the real stories in your area, and if you live a little further away there is always Listen on line, and if you prefer your radio in bite size chuncks then they have a great range of podcasts available

Published in Podcast news
Be the first to comment!
Read more...
Page 78 of 85